The Art of Surrender by Brandon Olivares
Buy for $47

The Art of Surrender 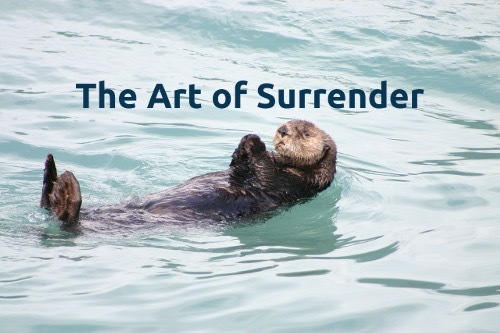 Does the law of attraction often seem like just so much work to you?

You have to decide what you want, and depending on what teacher you follow, visualize it in great detail, or else say affirmations dozens of times each day, or something else that all too often feels like a lot of work.

It's really cool when it works, but how often does it really seem to work as effortlessly as they claim it should be?

Or instead of visualizing or saying affirmations, you might go the other direction and spend hours per day releasing resistance or “reprogramming” your subconscious mind. After all, you know that if it weren't for those limiting beliefs, you'd have everything you wanted already, right?

All of this is just a bunch of ego busy-work as far as I'm concerned. None of it has ever been necessary.

Yes, that even includes subconscious reprogramming, or releasing resistance. I've taught about these concepts quite a bit in the past, but it's far too easy to put in too much effort into these endeavors and just get stuck in a bog of resistance.

I'm in favor of a much simpler way, which I call the art of surrender.

It's a way of radical non-resistance to life.

But resisting the unwanted only brings about more of it.

So, the art of surrender, while sounding passive, is actually a powerful approach that allows you to tap into the effortless ease of the Universe, and yet still get everything that you want.

This isn't unlike things I've taught in the past. What's the difference between this class, and previous classes like 7 Steps to Living at Zero and Creating From Zero?

I definitely still recommend those other classes if you haven't taken them yet. They're a great introduction to the state I call Zero.

But The Art of Surrender is about more than that. It's about radical non-resistance, radical non-doing as a way of life.

I won't ask you to visualize. I won't even ask you to actively release resistance.

The thing I'm pointing to is beyond all of that, and it makes all of it extraneous.

Again I know that the word “surrender” might seem really passive. I know many people who take issue with this word.

But it's far from passive. It doesn't call for you to give up your desires. It doesn't ask you to be a doormat in life.

We were meant to live in effortless ease, tapped into the limitless abundance of the Universe and allowing it to flow into our lives in myriad ways.

Imagine a life full of abundance: not just financial abundance, but an abundance of love, of health, of a wonderful career (or a prosperous business), of the perfect house, of exhilarating experiences, etc.

Imagine that every facet of life revealed the infinite abundance of the Universe.

And imagine that none of this required any effort on your part. No striving, no struggling, no trying to get where you want to go. Just resting here, in the center, and yet allowing the abundance of the Universe to flow effortlessly into your experience.

That is the art of surrender in a nutshell, and it's what I want to show you in this class.

You Can Still Have It All

As I said, you can still have it all. There is nothing wrong with your desires: in fact, despite what many spiritual traditions say, desire is a perfectly natural force, and should be embraced.

But the problem with most desire is that people use that as an excuse to suffer. But in the act of resisting the absence of that desire, they both (1) hold it away, and (2) perpetuate a state of effort, strife, and resistance, which translates to suffering.

It simply means living in a state of trust and flow, knowing that all you want and need will be provided for without effort on your part. It means knowing that the Universe only has wonderful things in store for you, if you'd just let go and allow them to come to you.

It's like the trust of a baby. A baby isn't OK if it doesn't get food or isn't cared for. But even though it can't walk to go get that food, or can't verbally ask for what it wants, it trusts that those things will come to it anyway. It's a state of total reliance, and yet all of its needs are taken care of effortlessly.

You don't have to be OK with what you want not coming. But The Art of Surrender will show you how to surrender to the knowledge that it will come to you, effortlessly.

There is a deep ego fear that if you do not try, struggle, effort, that nothing good will come. do you see that belief in you now?

But the Universe was not made for struggle. In all my time working with the law of attraction, never has struggle led to anything good.

In fact when I was younger, even before I knew about all this, and got myself into a rather difficult pickle, I would always stop and say, “OK Universe, I don't know how you'll do it, but you always make things work out. So go ahead.” And, every time, it would.

Are you ready to learn how we were meant to live, instead of living the way our egos believe we must, which only results in frustration?

The ego's way, despite what it thinks, only keeps us away from our desires, not to mention the peace and joy we are meant to experience. The Universe's way, however, actually brings our desires effortlessly into our reality, plus so much more that we could never have imagined even to ask for.
Buy Now

What's Included in the Class

This is a three week live class, with one class per week.

The tentative starting date/time is Saturday, May 9 at 2PM Eastern. However this is up for change, depending on what works for everyone who signs up.

All classes will be recorded for your future reference, or in case you are unable to attend, though I strongly suggest attending the live classes if at all possible.

Each class will be roughly 90 minutes in length, but we all know I can be rather chatty so it may very well go to 2 hours.

Included with the class will also be a meditation which will help you to effortlessly clear obstacles just by listening to it. I'll have you start this even before the first class begins. Don't worry, it's not a huge time commitment: only 7 minutes or so per day.

Finally, you will be able to ask questions live during the class, or else in the comment section on each class page. We'll also have a Facebook group you can join for discussing how to live the art of surrender.

Just click below to get started now for only $47. Once you join, you'll receive the information you need for getting started with the class.
Buy Now
Welcome!
Enter your info below to login.
Forgot your password?

This shop is temporarily closed.

If you're a visitor, come back soon. If you're the owner, click below to login and unlock your site.